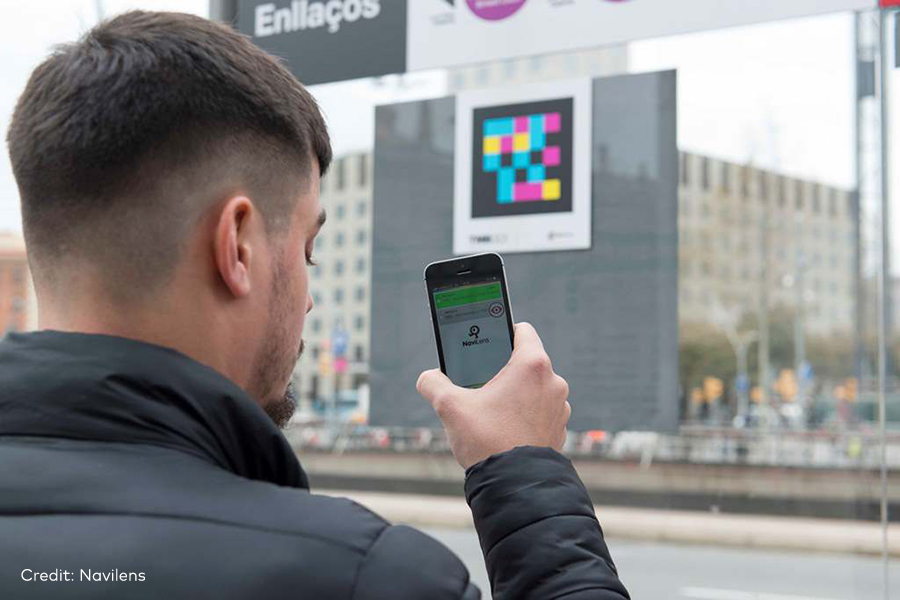 For many people with impairments, shopping can be a challenging, overwhelming and difficult experience. We take a look at new diversity and inclusion initiatives from brands and retailers helping customers with visual, hearing or cognitive special needs to shop in comfort, and with confidence.

Most of us think nothing of going shopping, being able to see the products in front of us and read the information on its label to make a decision on what to buy. But for the almost 2 million people living with sight loss in the UK, making such a choice doesn’t come so easy. Fortunately, technology has been hard at work, and there is a slew of new apps in town to help them do just that. Navilens, a navigation and labelling app, uses specially designed, colourful QR codes to help users identify a product and relay information about it. Where normal black and white QR codes can pose problems for the visually impaired (needing quite a lot of manual dexterity to focus and frame them), Navliens QR codes can by contrast, be detected at a distance of three metres and in low-light conditions. Once scanned, they pick up all information and translate it into audio for the user to hear.

Navilens has been used around the world to help people with sight loss to be more independent, whether that’s on transport networks, or providing information on exhibits in museums. But its first integration into retail took place last year, when Kellogg’s partnered with Navilens on World Sight Day to produce accessible QR codes on its cereal boxes – and Co-op (ever inclusive) was the first to stock them in 60 stores up and down the country. The user simply points their phone at the box, and information on allergens, ingredients and recycling is read aloud to them or available on screen using accessibility tools. Raising the bar in inclusive packaging design, we’re keen to see which retailers and brands are next to pick up the baton.

A pair of second eyes

Elsewhere, in the US, it’s the Aira app that’s making waves. It connects blind or low vision users to a real-time, remotely-located agent (yep, a real human!) who accesses the user’s mobile phone camera to view their surroundings and provide on-demand verbal assistance. First adopted by supermarket Wegmans, it helps users to find their way around the store, pinpoint specific items and identify the shortest checkout lines. It’s quite simply, a second pair of eyes – particularly useful when there are no store colleagues around to help. This year, the app was also adopted by Starbucks who has implemented it in seven trial stores, helping customers to navigate the queue, have the menu read out to them and describe pastry options on the counter. While Aira is in use here in the UK at Heathrow airport and Moorfields eye hospital, we’ve yet to find any retailers who’ve adopted it. So, come on, who’s going to be first?!

But what about hidden disabilities? How are retailers adapting to those?  ‘Neurodiversity’ is a relatively new term first coined by autistic Australian sociologist Judy Singer in the 1990s. It refers to the diversity of human brains and minds and the fact that there is no one ‘normal’ or ‘right’ way of cognitive functioning. Its spectrum includes a broad field of neurological conditions such as autism, ADHD, dyslexia, Tourettes, and dyspraxia and, depending on the source you read, it’s thought that between 10% and 20% of the UK population is neurodivergent. For these and many other people, shopping in an environment that overstimulates the senses, with bright, flashing lights, incessant music, overpowering fragrances and the constant bleep of scanners, can be overwhelming and distressing. Step forward then, those retailers who have identified – and acted – on this.

Morrisons launched its ‘Quieter Hour’ in 2018 after listening to families affected by autism who asked for quieter shopping conditions. This year, they extended the initiative to include Sundays too, and for that one hour each day, there are no tannoy announcements, no radio or music, electronic scanners are silenced and lights are dimmed. This dedicated shopping time approach has since been picked up by other supermarkets including Tesco, Asda and Lidl, as well as Toys R Us and The Entertainer. And in Ireland, Vodafone has gone one step further, partnering with autism charity AsIAm to introduce Autism friendly Wednesdays, when specially trained autism ambassadors are ready to assist, and relaxation boxes containing stress-relieving items like ear defenders, sunglasses and stress balls are available to customers.

Also in Ireland, Supervalu has introduced the ALF trolley (Autism Life-skill Friend) which comes with a mounted visual game to help autistic children focus on a specific task while shopping. These initiatives of course work brilliantly for supermarkets, but it’ll be interesting to see how other sectors, in particular those that favour high-sensory experiences like beauty and fashion, can adapt their stores in similar ways.

For the 11 million people in the UK who are hard of hearing or deaf, shopping poses its own challenges. Background noise making it hard to hear, a lack of hearing loops, and of course, the relatively new, but here-to-stay issue of face masks making it impossible to lip read. Many retailers have adopted the sunflower lanyard which customers can wear to signpost a hidden disability such as deafness, and have gone on big drives in recent years to train colleagues in sign language (shout out to Sainsbury’s whose 2019 ‘Signsbury’s’ pop-up shop did a great job in raising awareness of the complications faced by deaf shoppers). But according to the Royal National Institute for Deaf People, there’s more to do. Their ongoing campaign Access for All in Retail has recently called on retailers to address issues, and has reported positive responses so far. But what’s going on over the pond?

This year, Starbucks (yes, them again) opened its fifth signing store – in Japan, where special measures are put in place to help customers with a hearing impairment. Customers can order by speech-to-text voice recognition on a tablet, pointing to items or writing on a notepad. When orders are ready, a sign language animation invites customers to pick up their purchases.

Closer to home, the car sector is also making great strides, in particular, Citroën, which has this month becoming the first vehicle manufacturer to offer deaf and hard-of-hearing customers the chance to use British Sign Language at its retail showrooms. It has partnered with Sign Live, a live-link video service that lets the customer sign directly to an interpreter who can translate what the customer is saying to the staff. Hear, hear, we say.

These examples have shown retail to be at the forefront in adopting new ways to help those with impairments and, with this year’s Purple Tuesday – a day specifically set aside for improving customer experience for disabled people –  slated for 2nd November, we’re watching with curiosity to see where things go next.