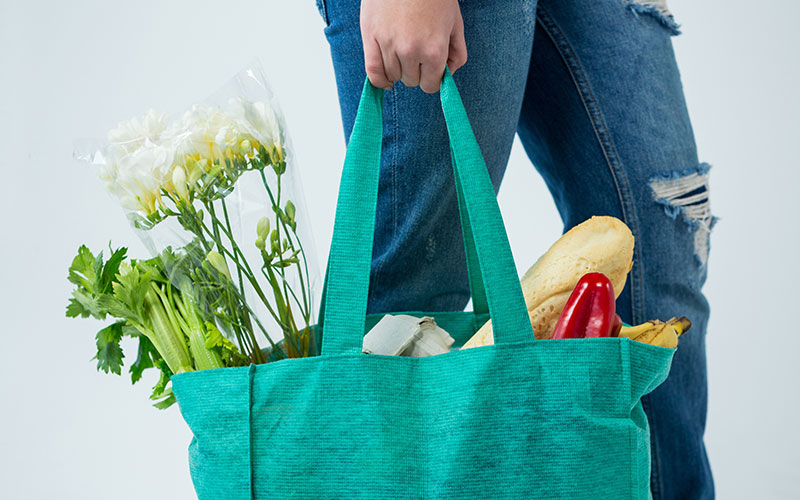 Can carrier bags ever be green?

Recently, it seemed as though we had made progress when the UK government announced that, thanks to its 5p plastic bag charge, UK stores sold 37% less single-use plastic bags in 2018/2019.

However, when you learn that even with this reduction, the UK sold 1.1 billion plastic bags, it hardly seems like a cause for celebration. (And that figure doesn’t include bags for life, which make up 28% of overall plastic bag sales.)

Beyond the 5p charge (which could soon be 10p), some supermarkets have already taken steps to sell fewer plastic bags: Iceland first trialled paper bags last summer; Morrisons recently started selling paper bags; and Aldi is trialling paper bags in half of its UK stores.

Unfortunately, the alternative might not be greener. Some studies claim that producing paper bags uses more energy and water than plastic. Paper is also heavier than plastic, so it has a bigger carbon footprint when transported.

So, what’s the solution?

When it comes to making carrier bags better for the environment, there’s still a lot of thinking to be done. But there are green shoots – here are some of the current initiatives we’ve found that could be developed further, to create carrier bags that are truly sustainable rather than just ‘more sustainable’.

Compostable bags, like the ones Co-op use in 1000 of its stores, are great. But if your council doesn’t collect compostable waste, and you don’t have a garden, you’re left with no choice but to send it to landfill, where it might not break down.

A plantable paper bag however, made from recycled paper waste, is truly compostable for everyone.

We’ve found some recycled paper bags that are embedded with seeds. When packed into a pot with some soil, the bags grow into plants – and before you plant them, they can be reused until they fall apart.

While the plantable bags we found are currently used for branded promo bags, we think plantable supermarket bags are a great idea. Pricey perhaps, but worth it for a bag that’s recycled, reusable and plantable. Planting a bag doesn’t use up as many resources as recycling one. Plus, as most of us remember from school science lessons, plants absorb carbon dioxide, which could help to slow down climate change.

In Qatar, supermarket Lulu offers customers the choice of hiring a bag instead of buying a new one. This is the best way of making sure bags are reused.

While it’s annoying to pay 5p when you know you’ve got plenty of bags at home, it’s even more annoying to know you’ve got one more bag to add to your ever-expanding collection. Imagine being able to take it back next time you’re in store, and maybe even getting your 5p back.

If supermarkets wanted to make a bold statement about reducing plastic bags, they could offer store credit for any usable plastic bags returned. A bag amnesty, you might say.

This week, Morrison’s started charging 30p for its plastic bags in selected Welsh stores. The move has had mixed reactions from shoppers – perhaps offering to give them their 30p back upon returning the bag would be a good compromise.

Bags for life → objects for life

While few of us have time to turn our vast arsenal of plastic bags into rag rugs, we could donate them to people who do. Stores could do a bag amnesty as mentioned above, and distribute the used bags to local schools or artists who want to upcycle them into creative pieces that will be used forever.

Alternatively, why can’t the bags themselves be useful objects? Like cardboard boxes with a handle that can be used for storage, or structured hessian bags that fold down into a pet basket. We think people would pay more for something that actually serves a useful purpose, beyond getting their purchases home in one piece.

Lidl’s new polyester produce bags are machine-washable, so you really can use them forever. However, the public is starting to catch on to the idea that washing synthetic materials releases micro plastics into the oceans. There are now companies, like Guppy Friend, making microfibre bags to use in the washing machine, and they don’t look dissimilar to Lidl’s new polyester bags. It got us thinking… could someone make a bag that does both?

Microfibre bags could be used again and again to transport fruit and veg home from the supermarket and then when they’re washed, they could be used to bag up synthetic clothes and catch microfibres. Win win!

We know plastic shopping bags are clogging up the oceans, but the most popular alternatives seem to be worse for the environment. The biggest problem is that we need to reuse them much more than we are – we need to basically reuse them for our entire lives.

In 2019, we need more innovative solutions to the plastic bag. So perhaps the question isn’t ‘what will it be made of?’, it’s ‘how will we reuse it?’

Open
DING DING! 4pm on a Friday afternoon is a sacred t

Open
Remembering the challenges we faced during lockdow