While food retailers prepare to shake up their stores and relegate promotions on products high in fat, sugar and salt to the side aisles, canny food manufacturers are cooking up ways to encourage us to eat more healthily.

What’s a trip to the grocery store for bread and milk without a bag of Percy Pigs making it into the basket? But now it’s au revoir biscuit BOGOFs and multi-crisp offers… with the new HFSS legislation introduced by the UK government looming, we’ve been reimagining what the new world of grocery retail might look like when the rules kick in… 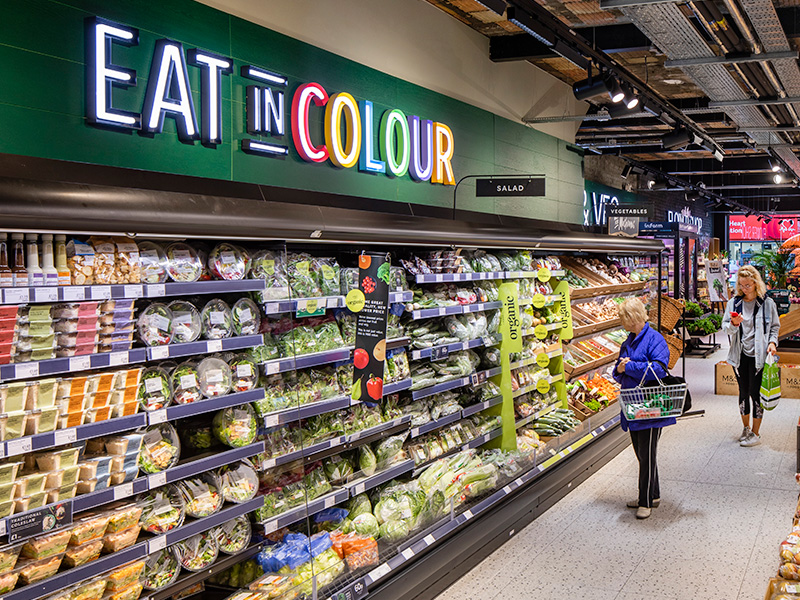 Let’s start at the beginning. In short, it’s a policy to restrict the way in which products high in fat, sugar and salt (like crisps, pastries and confectionery) are sold and promoted to the customer. The purpose of it is to encourage retailers to promote healthier options, enabling customers to make healthier decisions… ultimately to reduce overconsumption and tackle obesity.

Give the customers what they want

According to research by M&S, healthier eating is something the majority of consumers actually want, with 53% of families surveyed saying that eating healthily is a top priority for them. And it’s a trend that’s becoming more mainstream, from supermarkets to fast-food chains and even fashion stores. So, what are some trends we’re seeing already, ahead of these new rules?

In response to feedback from its customers, Tesco launched special ‘healthy zones’ inside its stores, as part of a campaign called Better Baskets, which it hopes will help encourage customers to make better choices. It has also rolled out a number of ‘under 100 calories’ bays and pledged to shelve buy-one-get-one-free offers on foods high in fat, sugar and salt. A bold move, particularly as the cost-of-living crisis bites.

Elsewhere, if further proof was needed that healthy eating is very much in vogue, H&M opened their first UK in-store café at Westfield White City with a virtuous, salad-filled menu to match the space’s leafy green interiors.

And, taking us from fast fashion to fast food, even Deliveroo have jumped on the bandwagon (or should that be bicycle?). Following research that showed nine out of 10 customers between the ages of 18 and 24 saying they’d buy food for delivery more regularly if there was a wider selection of healthy options, Deliveroo pledged to invest £1 million in promoting healthy eating for its partner restaurants. Our takeaway? There’s a growing appetite for healthy and convenient food at home – and brands need to cater for us, making it healthy (and snappy).

Let’s pop back to M&S. The retailer launched its Eat Well sunflower icon in 2005 – a nifty navigational symbol to help customers make healthier choices and take the guesswork out of decision-making when shopping for food. Now, the Whippet team is working with M&S Food to up the ‘Eat Well’ message’s game even more. 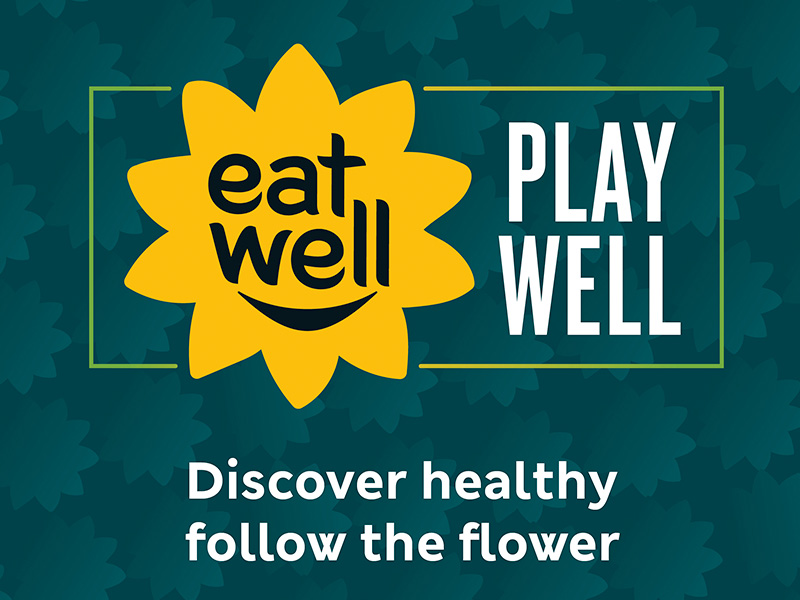 Move over unhealthy sports sponsorships of the past. In a bid to get more families excited about eating well, M&S is now a proud partner of the England, Scotland, Wales and Northern Ireland national football teams! We’re using the universal appeal of football to bring home the ‘Eat Well’ message to a new generation of sport and food fans.

‘Eat Well, Play Well’ is a dream-team of a partnership that promises to resonate with customers young and old and is present throughout their in-store and online food shopping experience. As well as everyone being invited to ‘follow the flower’ on Eat Well-stamped products and discover healthier choices, we’ve created an area in the M&S Foodhall where kids can pick up free pieces of fruit to snack on, and mini take-home recipe brochures filled with meals inspired by players’ favourite healthy ingredients. It’s all about sharing satisfying and easy-to-prep meals for the day. Plus, we can happily confirm that ‘The Southgate Smoothie’ does indeed hit the sweet spot.

Get healthy or get packing

Beyond making changes to the formula of the product (DON’T TOUCH OUR PERCY PIGS), many brands are also looking to the power of packaging for its untapped potential. For decades HFSS brands have stood out loud and proud purely because of their location in-store. But restrictions to these categories mean it’s going to be harder for shoppers to now find those brands – making shelves a battleground for attention… standing out is more vital than ever.

A brand’s packaging design is the only form of marketing seen by 100% of consumers who make the decision to buy – it’s a big piece of permissible media space (especially if you’re a super-sized cereal box). It’s also not just a box or jar to house a product – it can be a gateway to more brand experiences, whether that’s simply through a URL or QR code, or a bit of AR that could literally jump off the shelf – like Australian wine label, 19 Crimes. Simply hold your phone up to the label, and the former convict living on the bottle will come to life and tell you their story… it’s like dark magic (and delivers a richer brand experience for customers).

A brand’s identity across packaging speaks volumes. Colour has a major impact on behaviour and decision-making, and can often signal the health benefits of a product. From heart-beat-stimulating, appetite-enhancing red (a staple of fast-food mega-brands), eco-friendly and fresh green (the ultimate colour of nature), to uplifting, optimistic (albeit slightly cautionary) yellow. Through colour, we often visually digest a product before even taking a bite.

And finally, not forgetting font… a handwritten one might subliminally communicate handmade goodness (never mind that the sugar’s sky-high), and hessian-hued plastic adorned with floating foliage must mean that the bar inside is good for you – right? If you don’t have time to absorb every morsel from the nutritional information panel, the cues communicated via the packaging could make the decision for you.

Clean up on the aisles

Change is coming not just to the shelves… there’s going to be a pretty big shake-up on the supermarket floor, which could change the layout entirely. Let’s see how it might start to play out… 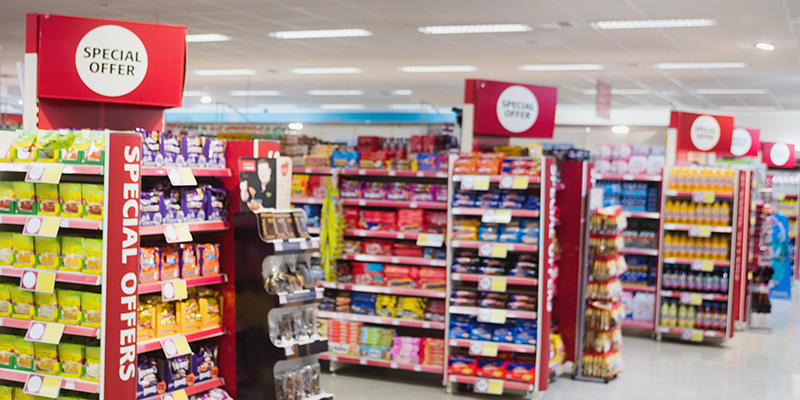 Goodbye gondola (as we know it)

On average, just under half of gondola ends across UK grocery retailers display HFSS products. From October 2022, other categories like pet products, baking, coffee and tea, spreads, wine and spirits, or fruit and veg can now stand to benefit from these powerful display places. Family fruit feast for four… it has a nice ring to it.

HFSS products will no longer be able to be within two metres of checkout tills. Again, this frees up prime pick-me-up shelf space for either more HFSS-friendly snacks and drinks…or perhaps some more surprising contenders. Last-minute lipstick for the road, anyone?

We don’t need a crystal ball to predict we’re going to see a big increase in POS found within the aisles. Shelf-highlighters, digital signage, interactive displays – anything you can think of, and some you can’t even imagine yet. It’s an exciting time for new retail POS concepts, and it’s going to be fun for agencies like us to create new eye-catching, mouth-watering ways to stand out… got a brief like this? Send it over – we’re hungry for a challenge.

So, what’s the recipe for success?​

Sometimes the best things happen when we make it up and experiment as we go (discounting that ‘cake’ I made last week).

A mix of different solutions, from recipe refreshes and packaging, to new concepts and digital experiences, could change supermarkets for good. The key will be for brands to embrace the opportunity – if they don’t, well, they might just find themselves left on the shelf.