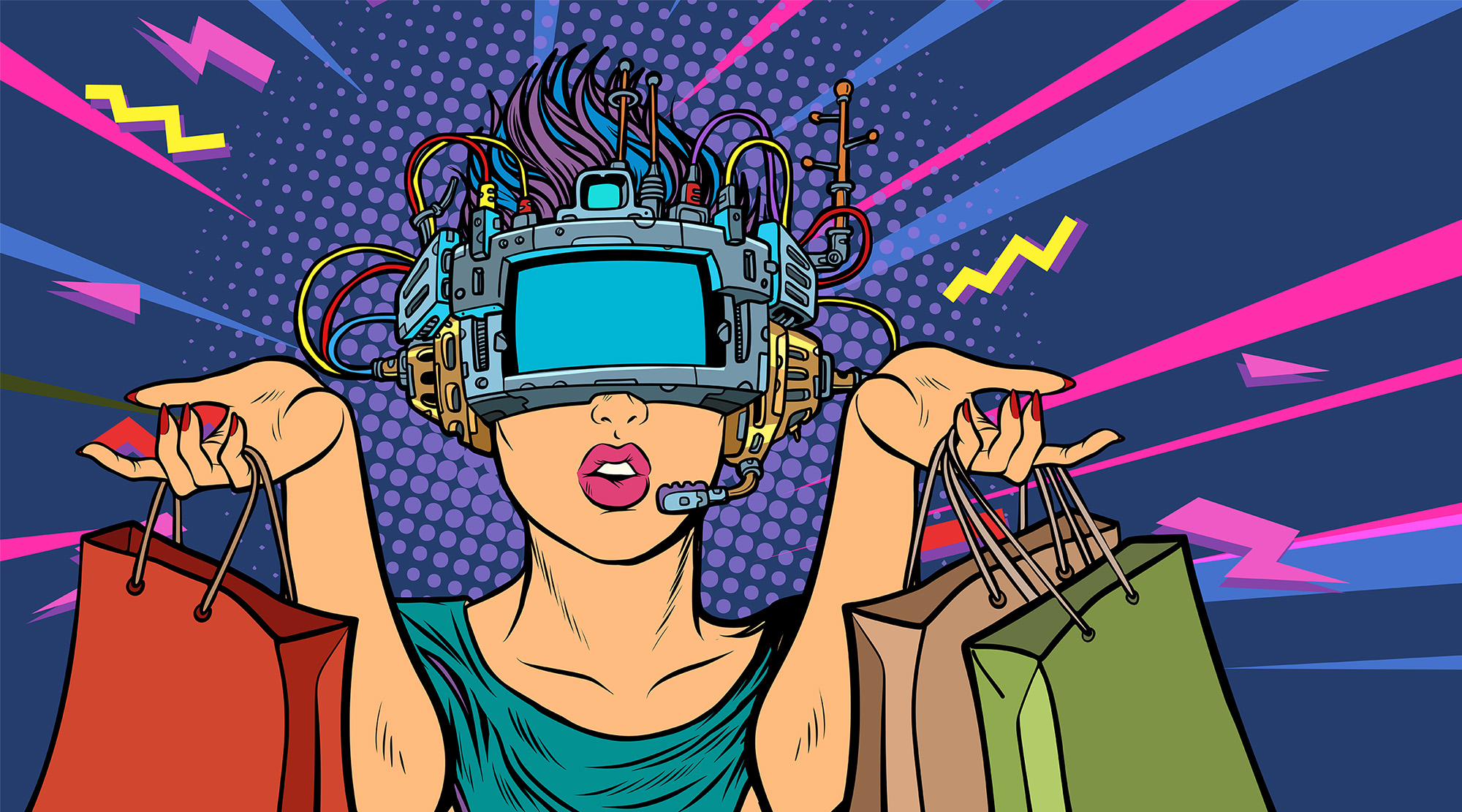 Retail brands have been experimenting with AR and VR for a while, but we’re finally at the point where the idea has gone from ‘gimmick’ to ‘great idea’. Let’s take a look at some of the more high-tech ways that retailers are reaching customers in 2020.

It’s the latter that’s been the most successful, perhaps because furniture is the one area that truly needed virtual – the only way of seeing what a sofa looks like in your living room is getting it in there, unless you use AR.

Ikea, Topps Tiles, Wayfair, John Lewis, Dunelm and Argos all have AR apps that customers can use to view products in AR. If you’re selling big-ticket items that cost a lot of ship, AR feels like a no-brainer!

Since coronavirus has stopped us from visiting physical stores for a while, we reckon even more brands will venture into AR.

If you think about it, online shopping isn’t that much of a move-on from catalogue shopping – there might be glossy photos and the odd editorial piece to inspire you, but essentially you’re just browsing products and ordering them.

Enter Obsess: the platform that allows retailers to recreate stores in virtual reality. Customers don’t need a VR headset to shop – they can use their phones to access HD, 360° digital stores.

While it’s currently used for fashion, beauty and lifestyle brands like Tommy Hilfiger, Levi’s and Ulta Beauty, we can imagine it being adapted by all kinds of brands. Specialist food retailers could create AR cooking demos for their virtual store, for example.

Virtual stores are perfect for people who love the experience of a real shop but don’t live near a store, or prefer to shop online – which is likely to be a lot more of us by the time the coronavirus pandemic is over.

Gaming is perhaps the most alien platform for retailers, but it could also be the most lucrative – it’s estimated that in 2020, the gaming industry will generate over $159 billion globally.

Perhaps the easiest way for brands to get themselves in games is by creating virtual clothes for players to dress their avatars in. There’s no money in yet, but it’s a powerful way of raising brand awareness.

For example, in the genteel game Animal Crossing (which has soared in popularity during lockdown), players have started creating their own virtual versions of designer and streetwear pieces. Brands like Marc Jacobs and Valentino have capitalised on the hype, by providing ‘official’ virtual versions of their latest collections.

Similarly, The Sims collaborated with Moschino to release a fashion collection last year, both in store and in the game. Plus, the mammoth game Fortnite recently sold real life and virtual merchandise for rapper Travis Scott’s ‘world tour’, which was all performed virtually in the game. (The first performance pulled in an audience of 12.3 million players.)

Another way brands can reach new customers through gaming is by teaming up with influencers on Twitch, or the newer platform Mixer; these platforms are used by millions to watch lifestreams of other people playing popular games.

Brands like KFC and Hershey’s have already sponsored livestreams from popular players, with great success; when Uber Eats gave Ninja – a Twitch influencer with 14.6 million followers – a discount code to share with his fans, the offer reached maximum redemptions in one day.

There are also real events that brands can sponsor, like Call of Duty and Pro Evo. The esports industry is worth an estimated $1.1 billion and the opportunity for brands to get involved is huge.

Lockdown has sped up what we already knew – that we’re living more of our lives online. It’s no longer just hardcore gamers who spend hours a day in a virtual world. Whether we’re working, socialising or relaxing, more of us are falling into virtual worlds – and it’s only natural that brands will follow.