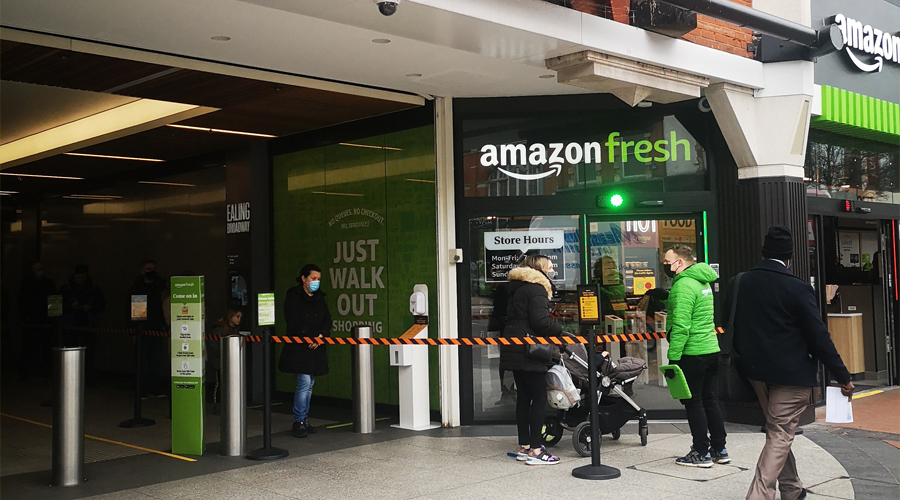 Inside the new Amazon Fresh store

Like snagging the belt hook on your jeans when rushing out the door, being held up when you’re in a hurry can lead to feelings of great irritation. In convenience shopping, it’s similar.

Tackling these issues head on is Amazon Fresh. The new, completely contactless store (a first for the UK) opened its Ealing store doors on Thursday 4th March. We went to experience it first-hand.

How does it work?

To access the store, you need to open your Amazon Shopping app, click the basket, click ‘Fresh Code’ and then scan your unique QR code at the gate to operate. Easy.

Once inside, it’s all pretty straightforward again. The ‘halo’ which surrounds you heat maps your journey and is combined with weighing mechanisms on the shelves that can tell when you’ve picked something up and then charge you at the end. If you change your mind and put something back before leaving, it simply reverses the process and you won’t be billed. Take what you want and skip on out. You don’t even need to rescan your code to exit. All feels very positive, right?

You pack as you shop which feels less stressful to start with, and because everything’s costed up per item you don’t need to worry about any scales playing up. This doorstep shop has a fairly wide offering too, selling the usual items you’d expect in a convenience store plus some Amazon tech products like those you might find in an airport. It’s got a take-away coffee station complete with a machine dedicated to dairy-free milks, and boasts hot snacks, a mini bakery and even an Amazon Hub zone for online pick-ups and returns.

Products are a mix between Amazon own label and well-known brands like Morrisons and Boots, so you can get everything from hair care to washing tablets. You can even grab your weekend wine if you can get past the bouncer guarding the booze section (though it makes you wonder what would happen if an underage person skipped past. Would the ‘halo’ also pick that up and send out an alert?).

Staff feel clued up on the tech that’s tracking you, yet they were less sure where to find stuff on the shelves; it took two members to track down some olive oil in 2,500 sq. ft. That’s okay when you’re not in a rush, but if the purpose is to create a speedier shopping experience then it might suggest a rethink to the layout is needed.

Psychologically, it’s very easy to lose track of what you’re spending – especially as pricing is to the penny not pound. You’d have to be a numerical whizz to keep a tally with items costing £3.37 or 41p. And as there’s no trolley or basket, presumably to encourage packing as you go, you don’t have an obvious physical reference to make an educated guess. Could that be off-putting for the more cost-conscious shopper? Particularly as you have to wait until you leave for your receipt to ping through on the app which can take some time. There is of course the question too,  of what happens when two shoppers are ‘haloed’ in the same area when only one returns an item both have picked up.

Special offers are highlighted by red casing around the price ticket which works well for shelf stand-out, but it’s hard to distinguish between what’s on offer now versus a more everyday cost saving. An ‘Introductory Offer’ is marked up the same way as ‘2 for £2.50’ deals for example, and the latter being used in more than one place caused some confusion about mixing and matching.

Dietary requirements are also spread out rather than found in a specific section. And though this could all happen in other convenience stores, it’s a little less expected in one that’s forward-thinking.

Besides contactless payment and no queuing, is there more that could be done to distinguish it from shopping how you normally would in these places?

There’s no denying Amazon’s insatiable appetite for the retail market or the brand’s popularity. But organising items online is very different to creating an experience that communicates clearly for customers in store.

It does have a lot to offer though and feels akin to when the Oyster card was first introduced; the concept is novel and solves a customer problem, even if in an unconventional way. It feels handy for those with additional needs too, as they can move about freely knowing popping something under the pram or in the wheelchair bag isn’t going to lead to any awkwardness at the door. And ability aside, if you’ve ever gone to pay for something only to realise you’ve left your purse or wallet elsewhere then removing the need for cash or cards altogether is also quite appealing.

Much like online shopping being introduced to soothe other shopping concerns, Amazon Fresh removes one of the greatest bugbears for those that still like to buy in store. And while there’s usually a period of unrest that comes with change, after initial trepidation we could see an even wider spread of retailers adopting the tech. Amazon’s second store has already opened in Wembley, and rumour has it Islington is next. Watch this space…