When we visited the Amazon Go store back in January, we were excited for the possibilities of till-free retail, and it hasn’t taken long for the idea to spread across the pond. Four weeks ago, Sainsbury’s opened the UK’s first till-free store, right in the heart of London.

As you can already use the SmartShop app in 100 branches of Sainsbury’s, we wondered if this is a novelty store, existing purely to promote the app; it’s certainly received a lot of media coverage. (Even the Queen has voiced an opinion, commenting on a recent visit to the Sainsbury’s 150th Anniversary store, ‘That’s an interesting tool.’)

But the fact that Sainsbury’s chose a busy, existing store made us think that perhaps this is something more than a PR exercise, signalling the beginning of our new retail reality.

There was only one way to find out!

The store does a great job of advertising to passers-by, with a wall vinyl in the trademark orange branding stretched across the store front, delivering snappy, impactful copy. You can’t walk past without getting the message.

On the day we visited, the store was heaving with shoppers, even though it’s a small store with only two aisles, and many of them were taking photos just like us. This suggests people were mainly visiting for the novelty factor, rather than doing an everyday shop.

However, Sainsbury’s were well prepared for any shoppers who were unaware of the SmartShop concept. As soon as we walked through the doors, we were approached by staff who were happy to explain the concept and ask if we needed help. 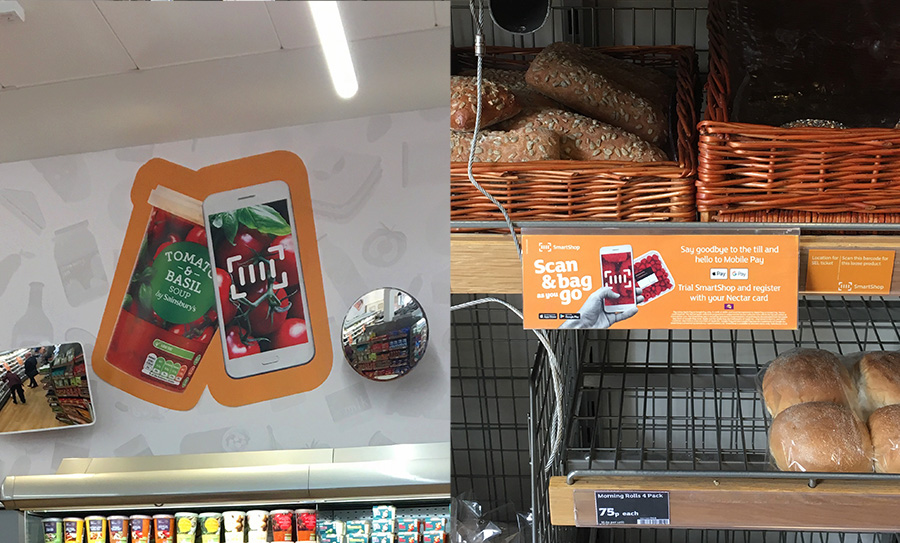 Inside, the messaging was just as visible as outside. We loved the simplicity and directness of the line ‘Scan and bag as you go’. This was the most prominent message, visible everywhere from fins and woofers to wall vinyls and bunting.

There was even a table by the entrance, piled with leaflets instructing shoppers how to use the SmartShop tech. The phone-shaped flyers were particularly effective, with simple, reassuring copy: ‘It’s easy’ ‘It’s speedy’ ‘& you’re in control’.

The tech itself is easy to use, as promised. You download the app, shop and then scan a QR code (so Sainsbury’s knows you’ve finished) to pay on your phone. 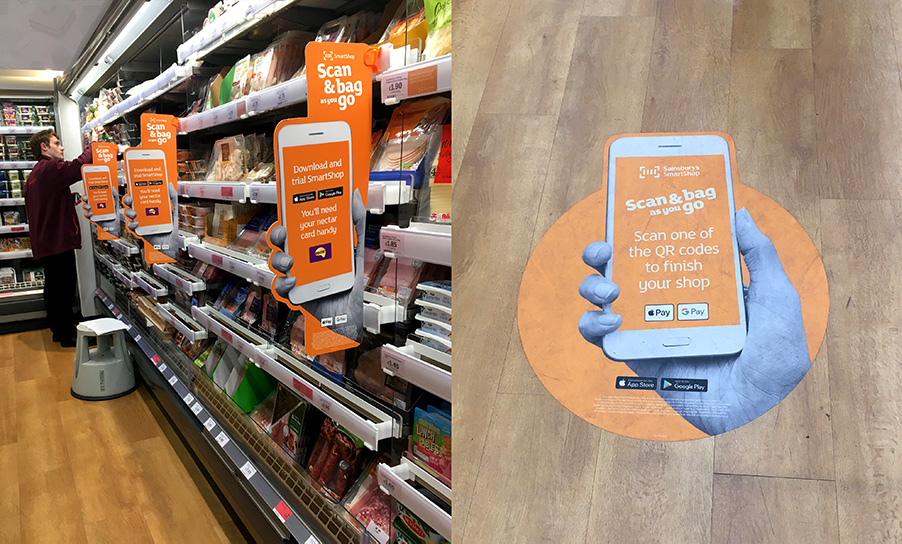 With only two aisles, the UK”s first till-free concept feels like a test store rather than a format Sainsbury’s are going roll out across the country – and we think that’s smart.

While it’s tempting to think of the self-service till as the mini disc to SmartShop’s iPod (a stepping stone to the next, more enduring innovation), there will always be shoppers who resist it, or who are unable to use it.

It’s telling that, despite being heralded as the UK’s first ever till-free convenience store, there was one till (called a help desk by Sainsbury’s) after all, just in case anyone had trouble using SmartShop. Even more telling? The new Amazon Go store in New York has announced that it will accept cash too.