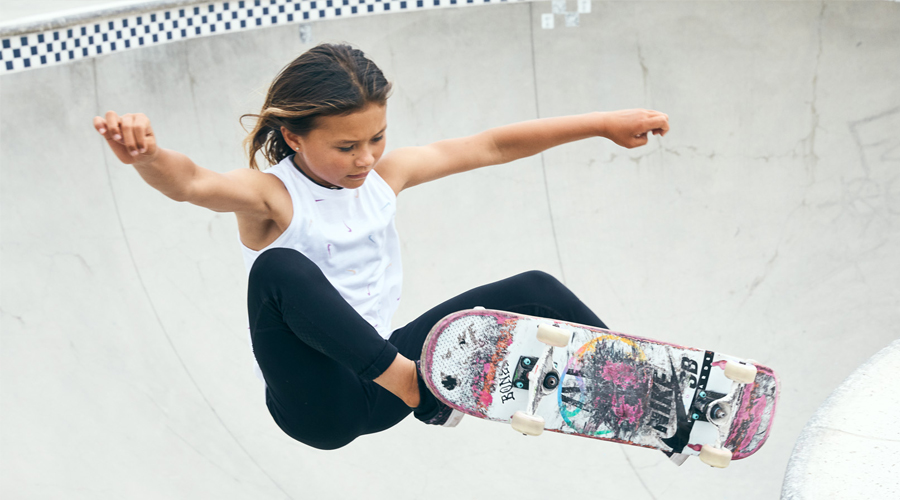 The kids are in charge

Olympic skate boarder, Sky Brown, is the very definition of phenomenal. Taking part in Tokyo 2020, at just 13 years old, made her Britain’s youngest ever Olympic competitor. And winning a bronze medal, in spectacular fashion, is only one of her achievements. Just a year ago, she bounced back from a potentially life-changing accident. She’s released a pop song, been immortalised as a Role Model Barbie doll, and appeared in TV ads alongside Simone Biles and Serena Williams. She’s also a talented surfer and plans to compete in both sports at Paris 2024.

It’s not only what she achieves, but how, that’s so impressive. Having a choice of representing host nation, Japan or Great Britain at the Olympics, Sky chose the latter, because Team GB made it clear there was ‘no pressure’ and she could pull out at any time. That seems like a very grown-up decision for a teenager, one that chimes with the focus on mental health at Tokyo 2020.

No wonder 1.3 million people are inspired to follow Sky’s every move on Instagram. And it’s no surprise that many brands are keen to grab a piece of that engagement. The 13-year-old is already worth an estimated £3.5 million and has secured partnerships with, among others, Nike, Vans, Tommy Hilfiger, Claire’s Accessories, Visa and Samsung.

Top influencers are great storytellers too. Knowing how to grab and keep their fans’ attention is what makes them so successful. Which means they’re able to dig a little deeper and add detail about a product, as well as vital opinions, that any traditional campaign wouldn’t be able to cover.

With someone like Sky, youth is a huge factor in her appeal too. Many of her fans will be those hard to reach teens and tweens, aka Generation Alpha. Gen alphas (kids born from 2010 onwards) are the perfect target for many brands, as this is an age when you can create some of the deepest, most loyal connections. Not to mention an age of prime pester power.

In fact, in seems alphas are having a much greater effect on what their parents buy than in previous generations – and not just in the categories you’d expect. According to Nick Richardson, founder and CEO of The Insights Family, these children, who are growing up in a digital world, now influence things “that do not necessarily concern them” such as the choice of family car or household appliance. So it’s clear that, if kids’ opinions really count, brands really need to court them.

A report by Wunderman Thomson in 2019 looked at the phenomenon of the gen alpha consumer and the appeal of influencers. Finding that “Over half (55%) of Generation Alphas will want to buy something if their favourite YouTuber or Instagrammer is using, wearing or consuming it.”

A quarter of young people surveyed said influencers were their biggest driver to buy items. Although their friends still top that (just) at 28%. Compare this to their families at 21% and traditional celebrities, scoring a much lower 6%.

It goes further than that, it seems. Not only do kids want what their social media idols have, a significant number are keen for them to sell it directly to them too. “When asked what’s the one thing they would most like to change about shopping, 14% of kids said it would be for influencers to have their own retail outlets.” The rise of influencer merch can only continue.

Sky Brown is not alone in the realm of young influencers. Perhaps the most famous is Ryan Kaji, aka Ryan’s World (previously Ryan’s Toy Reviews) who boasts 30.3 million subscribers to his YouTube Channel. The 10-year-old started out when he was just four, making entertaining videos of everything from science experiments to unboxing toys.

He now promotes a long list of brands, including Nickleodeon, Mattel, MGA Entertainment, Moose Toys and Lunchables, as well as his own branded toys, clothes and homeware. In both 2018 and 2019, Forbes named Ryan the highest earning YouTube streamer of any age. But he and his family have also faced criticism for blurring the lines between advertising and content. Issues that are now being addressed by ASA (in the UK) and TIA (US) with clearer rules and consequences for ‘non-disclosure’ of advertising content.

Another successful kidfluencer is 13-year-old Tiana Wilson, a British YouTuber with 11.5 million subscribers and a focus on Roblox and unboxing toys. Her latest partnership is with Lego and she, predictably, sells her own range of merchandise.

Other children with over a million subscribers, related branding deals and merch, include 12-year-old Birmingham City footballer Lorenzo Greer aka tekkerz kid and Ethan Gamer, who started his gaming channel at 10 years old.

Like Sky Brown with an Olympics to train for, it seems there’s no stopping these youngsters or their growing brand allure. Influencers are likely to become an ever-more critical part of the marketing mix, as those who’ve lived with social media their entire lives begin to outnumber those who haven’t.

It will be interesting to see whether it all becomes too much though – as more brands get in on the action and the rules around highlighting ad content tighten. Perhaps that precious and elusive ‘authenticity’ will finally fade and the alphas will simply grab their boards and skate on.