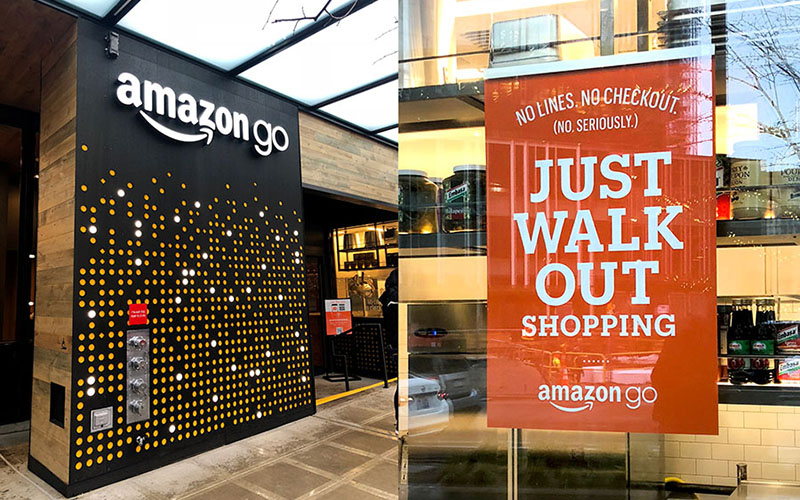 We went to the Amazon Go Store in Seattle

With 9 stores in the US, a rumoured 2019 expansion to the UK, and allegedly 2,000 stores planned to open over the next ten years, we just had to check out one of the buzzy new Amazon Go stores. For those who haven’t heard, Amazon Go is a chain of convenience stores launched by Amazon in 2018 that  uses what the tech giant calls “the world’s most advanced shopping technology” to let customers shop without the need to queue or checkout to make purchases. Amazon calls it the “Just Walk Out Shopping experience”.

Here’s our take on what worked and what didn’t, and what it means for retail design. 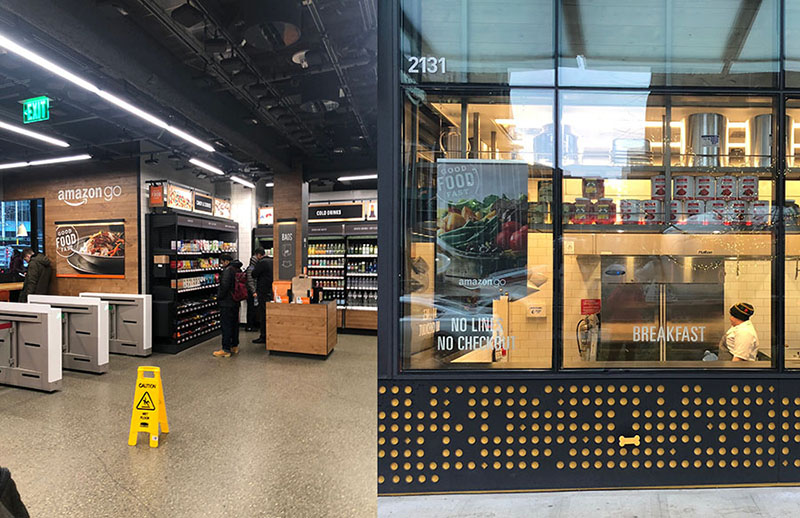 We walked up to the flagship store located in Seattle, and immediately there was a sense of excitement. The exterior of the store has minimal branding in black and orange (colours pulled from the Amazon logo), but is mainly glass, allowing passersby to peer inside to both the store itself and a large kitchen where fresh meals and snacks are prepared on site. When you walk inside, there’s a small alcove before you reach the scanner gates – a great place for the crowd (mainly tourists) to get out of the rain to download the Amazon Go app, which is needed to scan in. There were also two Amazon employees helping people get set up, and answering questions, which was particularly welcome when they showed us how to scan two of us in with just one phone (otherwise the phone owner would be paying for whatever the second person picked up too!). 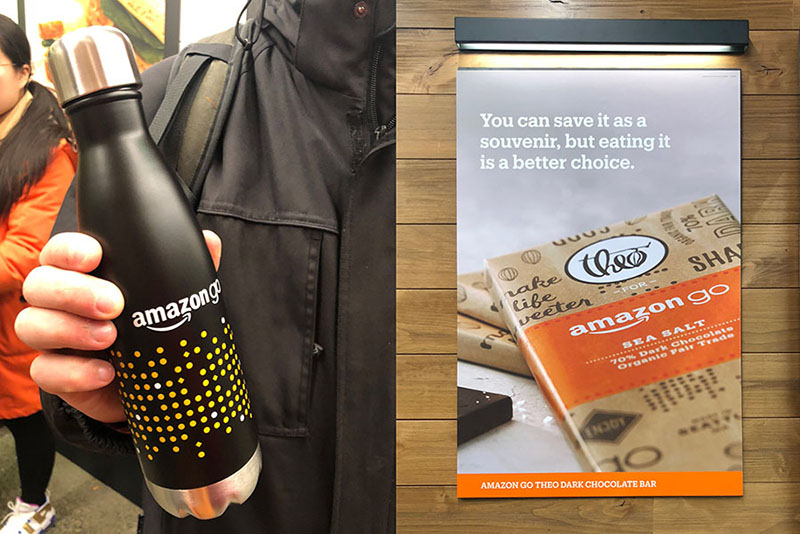 Inside, most of the store is dedicated to prepared meals, which all look pretty good, but there are also grocery aisles for all the essentials. We picked up – and put down – lots of different products, but ended up only grabbing a few souvenir chocolate bars for the team back at the studio (we love the fact that the store acknowledged its customer base of techie tourists by selling souvenirs!) and then we… walked out with them.

Yep it was definitely a strange and counter-intuitive moment to just walk out the gates without paying (you don’t even need to scan out to exit, the exit gates just open). Nothing happened on our app upon exiting, so thinking maybe it hadn’t worked, we approached one of the Amazon employees to check. She casually laughed off the feeling of stealing, and let us know the app would update within a couple minutes. Sure enough, approximately 4 minutes later, and a few blocks away, the app updated with a receipt with our exact purchase on it. It felt like magic. It felt like the future. It felt extremely cool.

What worked and what didn’t

While we enjoyed the futuristic vibe of our experience, we feel like some of the in-store communication around how exactly the app worked could have made a huge difference. Before we visited. we had read that the our ‘virtual cart’ would be updated live, tracking what you picked up and put down. We had assumed this would be visible on the app, but instead, the screen stayed the same while we shopped, showing the same QR code we had scanned in with. It wasn’t until we were well away from the store that the app was updated to show our receipt. As the technology becomes more familiar, this wouldn’t be a big problem, but  especially given that most of the people in the store seemed to be curious first-timers, it seems like more could have been done. 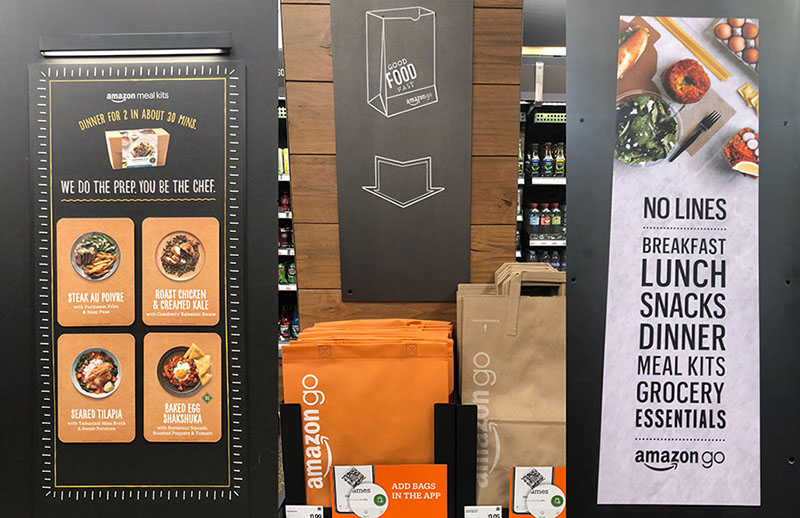 The overall feel of the store was that it was a little bit stark, almost too clean, and not very ‘foodie’. We think this is because the complex system of cameras that track your virtual cart as you pick things up throughout the store needs to see what people are doing clearly. The tech was well-hidden though, and unless you looked up to the ceiling, where the cameras were camouflaged in all black, you would hardly notice it. Along with hiding the technology, Amazon has clearly made design decisions to make the store feel non-techie and approachable, such as the use of warm wood panelling, a friendly tone of voice, and hand-drawn illustrations and food photography throughout the store, but it still felt a little cold compared to what we’re used to from a grocery store.

What absolutely worked was how Amazon had translated their previously online-only brand to a retail store. Using colours derived from the logo, and fonts, design and tone of voice that felt friendly yet simple, much the same as is used through the online experience everyone is familiar with. While there were aspects of the design we think could be improved, overall it felt like a pretty seamless cross-channel experience.

Is this the future?

Overall, our visit to Amazon Go was a fun look into what the future of retail will inevitably hold. Because of its novelty, the store felt a bit like a PR exercise to show off Amazon’s technology muscles, but they did a good job making the impenetrable, futuristic technology feel approachable. Also, we’re not going to lie: if an Amazon Go opened up next to Whippet HQ, we would be in there nearly every day – you just can’t beat the convenience of saying goodbye to queuing elsewhere in favour of being able to pop in, grab a fresh lunch, and walk out in just a few seconds.